Ahead of his talk at this month’s Quietus Social, Mick Houghton remembers his time working with Sun Ra in the early 90s in an exclusive extract from his new book Fried & Justified 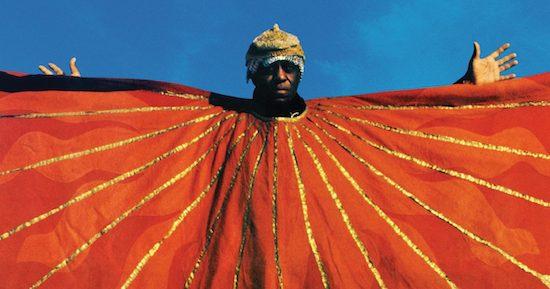 I was always drawn to outsider artists. As a rule they rank high on inventiveness and originality and are usually only later recognised. In 1989 I began working with Paul Smith and Blast First ostensibly to take on Sonic Youth. Paul was definitely an outsider himself and through him I also handled the publicity for Suicide, Ken Kesey and Sun Ra. They all changed things by not playing by any rules other than their own and nobody more so than Sun Ra.

Sun Ra claimed to be an angel from the planet Saturn and this strange allegation has overshadowed the fact that he’s one of the most important figures in jazz. He’s had an increasingly potent influence across many other genres since his death in 1993. Perhaps the world is catching up with the man who since the late 50s usually led a big band, most commonly known as the Arkestra. When you suddenly find yourself working with somebody regarded as one of the greats, you have to pay due respect. Some of Sun Ra’s music left me cold, most of what I’d read or heard about him left me awestruck.

In 1989 Blast First had released a Sun Ra compilation, Out There A Minute, the first ever to appear on a rock label. It made total sense for Sun Ra to be on Blast First. His music was part of the label’s DNA, especially these particular recordings from the end of the Arkestra’s 1960s New York period. A tour in 1989 had to be postponed, but Paul brought the Arkestra to the UK a couple of times in 1990, first to play three dates in June and again in October to play the Hackney Empire. In between Sun Ra also played at the Edinburgh Festival. He’d been commissioned to write a piece entitled Music For The 21st Century by the organisers of the Edinburgh International Jazz Festival. He ignored the commission: “Music for the 21st Century,” he told one interviewer with typically sardonic sparkle, “I wrote that in 1965. I work ahead. I’m writing my 30th Century music now.”

I felt genuinely privileged and not a little wary of meeting Sun Ra when he arrived in London in June with a 17 piece Arkestra whose core – tenor saxophonist John Gilmour, altoist Marshall Allen and singer June Tyson – had been with him for almost four decades; Tyson was the latest of these to come under Ra’s spell after he discovered her singing in Harlem in 1968. She was effectively managing the band day-to-day and looking after Ra during a week in Britain. The Liverpool date at the Bluecoat came first on 8 June. We took over an entire rail carriage when the Arkestra travelled there, plus crew members, Paul and Jane Burridge from Blast First, and a journalist and photographer from The Wire. The carry-on luggage and instruments included the five foot long, log drum made from the trunk of a lightning struck elm tree which, onstage, produced a deep boom like a monstrous clap of thunder.

Hanging out with Sunny as we all came to know him was understandably intimidating. After all, he was an outlandish musician, showman and remarkable intellect but he was also a charming, spiritual soul who always had a mischievous twinkle in his eye. “I’m famous and infamous, cussed and discussed,” he said at one point and it could have been Tom Waits speaking. Waits may well have learned a trick or two from the master. Ra’s mission was 24/7, almost literally; he was renowned for very rarely sleeping. That alone kept the Arkestra on their toes: he could call a rehearsal any time of day.

Everybody kept their wits about them in his company. He was very anti-drugs and maintained strict control over his band members. Those who had been with him for forty years were respectful, but some of the younger ones (the average age of the outfit was around forty) found his regime of ‘no drink, no drugs, no loose women’ more challenging. There was a lot furtive smoking and lacing of soft drinks with spirits on the sly, and plenty of surreptitious exchanges away from the glare of Sunny and June.

As you’d expect from a man who’d travelled the universe, his knowledge was profound and scholastic in subjects including numerology, theosophy, metaphysics, theology, divinity, history, ethnomusicology and plenty more beyond my ken. So on the train, understandably apprehensive, I resorted to a little small talk and asked him about the Disney repertoire he was due to play at Brixton Academy two days later. The response would have been oddly normal had it not been Sun Ra speaking: “I saw Mary Poppins again,” he said in his soft, calm, Southern voice. He’s talking about the film. ”It’s fantastic, a masterpiece. They were doing this ‘Chim Chim Cheree’ dance and I thought what they were doing was the very soul of England.” If I was meant to laugh I suppressed it but I wondered if his whimsy was intentional since he was speaking completely poker faced to a star struck English man.

“When we play in my home in Philadelphia, “I overheard him tell one interviewer in Liverpool, “even the spiders come down from the walls to listen; everything in the universe loves music.” Imagine a playful Jehovah’s Witness, if such oxymoron is indeed imaginable. That was Sun Ra. He’d answer direct questions about music or his background but mostly, if you asked him a question, he’d veer off on a lengthy, twisting train of thought that was hard to keep hold of. So you took everything he said at face value however fanciful such claims that: “I went to Jupiter, you know. That’s why I’m always singing about Jupiter. I was taken there by a guide, looking down at this little planet. Now people might not believe it, but I knew I went there.”

The Liverpool show provoked the wildest and keenest audience response of the three shows. In the confined space of the Bluecoat the onslaught of massed percussion was empowering; a six strong back row of the band consisted of a double bassist and five percussionists, others in the 17 piece outfit also doubled on additional percussion including another long-timer, James Jackson on bassoon and the lightning drum. Ra was dressed in rainbow coloured priest’s robes and sporting a natty red goatee to match his hair. Once you see the Arkestra in their full glory incorporating elements of a space-age soul review you understand where George Clinton got the idea for his Parliament Funkadelic thang. The Brixton date was cancelled last minute so another was hastily arranged at the University of London Union. It closed with a space rap incorporating ‘Space Is The Place’ and one of the Arkestra’s earliest recordings, ‘Rocket Number Nine’, the band echoing Ra’s invocations as they skipped off stage in a conga line leaving Ra to croon that he dared to knock at the doors of the Cosmos. The second London show at the cramped Mean Fiddler in Harlesden was twice as long, the first set fraught with technical problems but with more Disney repertoire – a re-vamped ‘Teddy Bear’s Picnic’ was hysterical. By the second set a series of wild exultant percussion pieces and some frazzled horn explosions and dissonant brass was finally too much for me. He never did play ‘Chim Chim Cheree’ either.

Paul and I once took Sun Ra shopping on London’s Denmark Street. It was near closing and the young shop assistant had no idea who this ageing, flamboyantly dressed shopper outstaying his welcome was. The lad was impatiently drumming his fingers on the counter so I went to placate him while Paul watched over Sunny as he hobbled around trying one effects pedal after another. The boss suddenly appeared at the counter wondering why the shop was still open. I apologised before asking, “Don’t you know who that is?” And told them. The assistant still looked blank but the boss’s eyes lit up. “It’s like having Hendrix in the shop,” I explained, his boss nodding in agreement. Paul bought him up a ‘heavy metal’ guitar pedal. Sunny had no idea it was a modern-day music genre, he liked the name and went on to explain how the laws of physics were different on his home planet.

In 1991, Sun Ra suffered a series of strokes and was admitted to a Philadelphia hospital, where he famously gave his birth-place as Saturn, which was verified by a clued-in doctor. After three months rehabilitation, he was back on the road but thereafter, he was confined to a wheelchair with his left hand impaired. In 1992, I was fortunate to see Sun Ra and his Arkestra one last time, this time supporting Sonic Youth in Central Park on 4 July 1992.

The Arkestra line up for Central Park had changed little in two years and I was warmly greeted by members of the band in the artists’ enclosure which didn’t go unnoticed by Sonic Youth. It did wonders for my underdeveloped cool quotient. A near monsoon overnight threatened to stop play but, almost as scripted or ordained, the sun appeared just as Ra and the band took to the stage in red and gold kaftans and turbans. Ra now guided the band from a wheelchair that served well as a throne. It was heavy on Afro rhythms with veiled dancers weaving across the stage. When Sonic Youth came on stage Thurston, an avid Sun Ra collector, announced: “I’d like to thank Sun Ra for bringing the sun out because that doesn’t happen all the time.”

Fried & Justified by Mick Houghton is published by Faber on 2 July. Mick Houghton will be in conversation with Keith Cameron at the next Quietus Social, at The Social, Little Portland Street, London on Wednesday 19 June. Tickets are available from the Social