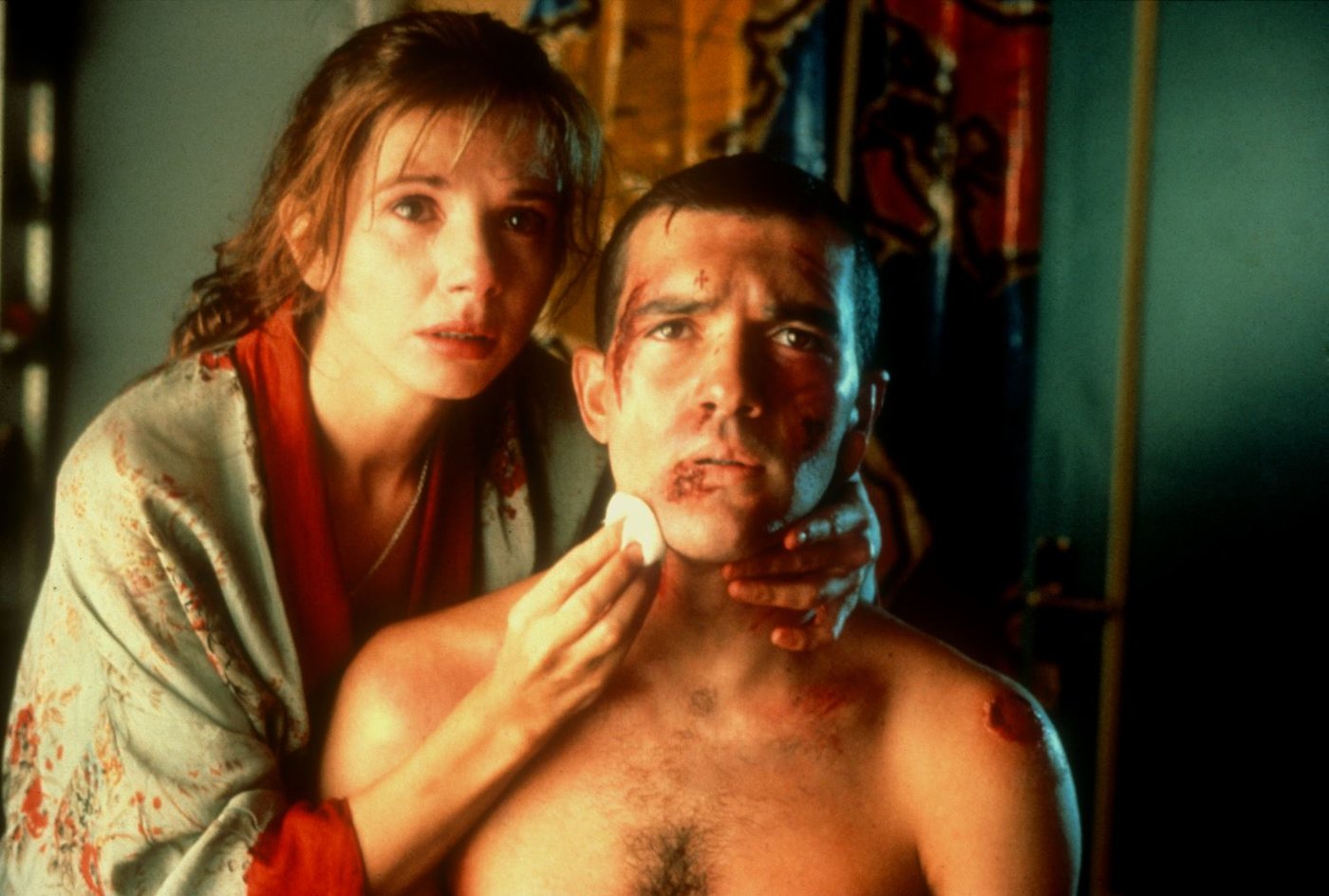 Tie Me Up! Tie Me Down! Courtesy of Photofest

Antonio Banderas is one of those screen presences who just seems to know. Preternaturally wised-up, his large liquid eyes are his gift, ever watchful and secretive. It’s like he was born knowing; he’s never not been on the make or aware of his own charms. In his decades-long collaboration with Spanish filmmaker Pedro Almodóvar, he has been an infatuated stalker, a vengeance-driven plastic surgeon, and an escaped convict. His characters are often driven in equal measure by obsessive love and violent impulse; even as a young man, he rarely portrayed an innocent.

With his inky, slicked hair, olive skin, and nobly handsome profile, the young Banderas sometimes looked like a sketch of a 1930s gigolo; you could easily imagine him as a homicidal pool boy or sexually fluid manipulator in a film noir. His good looks were not just fulsome; they fed into the old Hollywood archetype of the “Latin lover,” a handsome but often untrustworthy type personified by actors of a darker persuasion, like Mexican silent star Ramon Novarro or even Italian heartthrob Rudolph Valentino.  Almodóvar knew this, it seems, right from the beginning, and as an appreciator of old Hollywood, it seems he liked to make sly cinephilic reference to it.

These men always had a whiff of androgyny about them. At the height of the Latin lover’s popularity in Hollywood—prior to World War 2—this was a pointedly exoticized and racially precarious creation. Banderas fit the type perfectly, and Almodóvar, who always had a fascination with teasing the queer subtext out of classical Hollywood tropes, was the perfect artist to utilize it. In a recent interview with Spanish paper El País, Banderas recalled the pair’s first meeting in 1981.: “”’You have a very romantic face,’ Pedro told Antonio. ‘You should do movies. Goodbye.’”  The following year, he would make his first small appearance in Almodóvar’s film Labyrinth of Passion (1982).

But it was their next collaboration, 1987’s Law of Desire, that would begin to set the stage for the Latin lover archetype which would follow Banderas to Hollywood. The actor plays a young wannabe who becomes obsessed with another man, sleeps with him, and then eventually commits murder in order to force the object of his affection to stay with him. Vaguely Hitchcockian, Law of Desire would touch on themes and tropes the filmmaker would return to repeatedly: non-traditional families, the struggles of trans women, sexual abuse, and a mordant sense of humor. Banderas, though not the star of the picture, is the slyly domineering lynchpin of the story.

The Mask of Zorro

In American cinema, Banderas would move across a variety of roles, finding success in The Mambo Kings (1992) and in his supporting role as Tom Hanks’ boyfriend in Jonathan Demme’s landmark film about the AIDS crisis, Philadelphia (1993). Of the latter film, he has said that American conservatism around gay subject matter took him by surprise after his boundary-pushing work in Spain; he planted an unscripted kiss on Hanks that Demme kept in the finished film. For a heterosexual man born in 1960, Banderas never shied from playing gay or bisexual characters for the screen, regardless of the context.

Maybe it’s unsurprising, though, that Hollywood soon found a way to elide his more sexually ambiguous characteristics and shore up his traditionally masculine ones. In Robert Rodriguez’ gunslinging hit Desperado (1995), his character, “El Mariachi,” is the epitome of romanticized, macho cool, toting his guitar and his gun like a cowboy of old. If there’s any doubt, his love interest in the form of the radiantly beautiful Salma Hayek leaves little to wonder about. Desperado cemented Banderas’ stardom in an American film industry that had still not committed to making Hispanic actors into superstars. And yet Banderas moved increasingly into A-list territory, even while still being exoticized in his roles; in Assassins, his other breakout role from 1995, he played the traditionally foreign supervillain opposite Sylvester Stallone.

In 1998, Banderas was cast in what might be the most self-evidently throwback of roles: the lead in Mask of Zorro. Literally playing the old-school swashbuckler in the mode of his Latin love’ predecessors, the plotline was safely hetero, with Banderas as a bastion of dashing, uncomplicated heroism. It’s not a great movie, but it is a satisfying example of Hollywood’s immaculate calibration of star persona into something neat and digestible for audiences. On the related matter of things Hollywood does well, the vaguely racist descriptors trotted out about Hispanic people— hot-blooded, fiery, et al—could all be applied to the characters as they are written. But any suggestion of a lack of self-awareness on Banderas’ part can easily be shooed off. His voice-acting for the parodic animated cat Puss in Boots— based on Zorro— in the Shrek films and the stand-alone animated feature would put that to bed.

In 2011, after many years apart, Banderas reunited with Almodóvar for The Skin I Live In, where he plays a vengeful doctor seeking brutal retribution after his daughter is raped. This year, the pair have released Pain and Glory, a lauded and loosely autobiographical story of Almodóvar’s creative and personal struggles. In what feels nicely full-circle, Banderas is now playing the central role as a kind of stand-in for his old mentor. Deployed again by the filmmaker who arguably knows him best as a performer, Banderas seems to have had a major return to form.

Although the two characters of these films are utterly disparate, there’s a new wisdom to Banderas in both of them. The Spanish sex symbol is now 60, his handsome face lined, and his once-inky hair flecked with grey, but his maturation has done something else to him.  That same old sloe-eyed, watchful gaze seems restored to him. It’s made him look—more than ever—like he knows something we don’t.