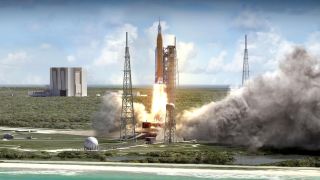 NASA¹s Space Launch System rocket will launch the Orion spacecraft that will carry astronauts to the moon.

What will it take for NASA to put humans back on the moon? Aside from a still-undetermined sum of cash, the agency will need to launch about 37 moon missions between now and 2028, according to a launch manifest presented at a meeting of the NASA Advisory Council on Tuesday (May 21).

The preliminary timeline, which was presented with an infographic labeled as “predecisional,” is not yet set in stone. But it represents what some agency officials see as the best path to return astronauts to the moon in 2024 and build a sustainable presence on the moon via the Lunar Orbital Platform-Gateway by 2028.

Of the 37 missions included in the launch manifest, 15 would take place before astronauts get to the moon in 2024. That 16th mission, titled Artemis 3 (formerly called Exploration Mission-3, or EM-3), will be the second crewed flight of NASA’s newly named Artemis program.

NASA’s Orion crew capsule, set to be launched atop NASA’s new Space Launch System megarocket, will bring astronauts to lunar orbit, where they will dock with the lunar gateway before descending to the surface in a commercial landing vehicle. Exactly who will build that lunar lander and how much it will cost remain mysteries, but NASA recently awarded $45.5 million to 11 U.S. companies to help fund the development of several different proposed landers.

Artemis 1, or EM-1, will be an uncrewed test flight of Orion and SLS and is scheduled to launch in June of 2020. Then, in 2022, Orion will carry astronauts to the moon for a flyby mission, but they won’t attempt a lunar landing. Before any of those Artemis missions take place, however, NASA must first complete the Ascent Abort-2 test of the Orion spacecraft, which is currently scheduled for July 2, 2019.

And before NASA sends astronauts to the moon in 2024, the agency will first have to launch five aspects of the Lunar Gateway, all of which will be commercial vehicles that launch separately and join each other in lunar orbit. First, a power and propulsion element will launch in 2022. Then, the crew module will launch (without a crew) in 2023.

Although the graphic shows those three Gateway elements launching in 2024, NASA may be able to kill three birds with two stones and achieve that same goal by launching only two elements, Bill Gerstenmaier, NASA’s associate administrator for the Human Exploration and Operations Mission Directorate, said at the meeting of the NASA Advisory Council.

“We envision that as three elements … an ascent piece, a transfer vehicle that moves the ascent and descent vehicle down to low lunar orbit [and] a descent stage to go down to the actual surface. We’re not sure 100 percent that it needs to be three elements, so we’ve asked the industry, because we’ve seen some proposals where they do it with two pieces, maybe two and a half — there’s a couple different considerations they’ve given us,” Gerstenmaier said.

Related: Can NASA Really Put Astronauts on the Moon in 2024?

Along with those two or three Gateway elements, NASA plans to launch up to seven robotic missions to the lunar surface through the agency’s Commercial Lunar Payload Services (CLPS) program. Those missions would involve rovers and landers that would conduct science investigations and explore ways that future missions could exploit the moon’s natural resources.

After Artemis 3, NASA would launch four additional crewed missions to the lunar surface between 2025 and 2028. Meanwhile, the agency would work to expand the Gateway by launching additional components and crew vehicles and laying the foundation for an eventual moon base.

Editor’s Note: This article has been updated to include the latest date for Orion’s Ascent Abort-2 test, as of May 23.

Have a news tip, correction or comment? Let us know at community@space.com.