Apartment occupancy growth had accelerated in 2018 after slowing a bit in 2017. At the same time, the housing market slumped in the latter half of 2018 after gaining some heat in 2017. Thus far, in 2019, existing home sales have fluctuated a bit, yet at higher levels than year-end 2018; apartment occupancy growth has once again been subdued. We had attributed the acceleration in the apartment market in 2018 to the tax cut at the end of 2017 that reduced the incentive to buy a home. Many have cited falling mortgage rates to the housing market spikes that occurred in February and again in May.

Despite having vacancies rise from 4.1% in the middle of 2016 to its current 4.7%, the apartment market has weathered the relatively strong influx of new supply very well. Performance has not been as brisk as recent peak years of 2014 (for lease-up velocity, when new buildings were achieving stabilization to market occupancy in 3 to 6 months – today it is closer to 9 to 15 months) and 2015 (for rent growth, which peaked at 5.8% for asking rents and 5.7% for effective rents). However, with construction slowing as soon as later this year and throughout 2020 for many major markets, continuing robust demand for rentals will likely manifest in vacancy rates that stay well in the 4s, or at most, rise to the low 5s. What may complicate this story is if the economy runs into any kind of contraction in the next 18 months. 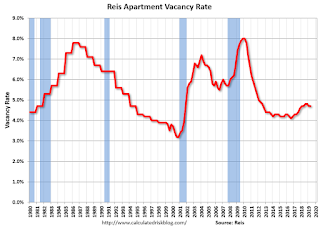 This graph shows the apartment vacancy rate starting in 1980. (Annual rate before 1999, quarterly starting in 1999). Note: Reis is just for large cities.

The vacancy rate had mostly moved sideways for the last year and half – after increasing from the low in 2016..