I had to keep reminding myself that one can’t have purely theoretical friends, one does have to actually see them sometimes—and it’s the sixth week, and I’ve only seen him once—and I know I’ll guiltily resent all the time he steals from my essay, but I mustn’t, because if I had no one I’d be miserable. Wouldn’t I? (26 February 2004)

Friendships come and go in every life, but in times of life shaped by anorexia, they tend to go far more than they come. This week, I’m running a writing boot camp, and as part of the goal-setting for our first writing session this morning, I told my neighbor what I was working on. She replied that she’d like to read it because she had lost a friend to anorexia. The friend is still alive, but she never said yes to any invitations to do anything, and in the end, their friendship died. 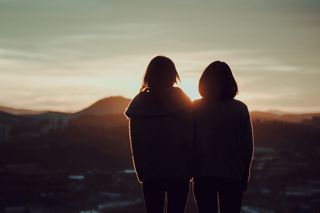 This is a common story in anorexia. It’s also not the only story. Friendships can affect and be affected by anorexia and recovery in all kinds of ways, good and bad and complicated. Here I’ll sketch out some of the main ones.

I’ll start with an overview of relevant research, which will be fairly quick because there isn’t much. Social interactions are well known to be compromised in anorexia, typically in the direction of avoidance, as well as, relatedly, with problems in emotional empathy (Morris et al., 2013) and in signalling, interpreting, and regulating emotion (Treasure and Schmidt, 2013; Harrison et al., 2014). Social anhedonia, a reduced drive to seek and experience pleasure from social contact, is also observed (Harrison et al., 2014). These problems are probably due primarily to malnutrition.

The body and the mind are tightly entwined through social behavior. There’s plenty of evidence that peer dynamics are connected to eating habits and body weight, both in general populations (Fletcher et al., 2011) and in anorexia specifically (Allison et al., 2014). These links manifest in quite specific ways.

One study found that even controlling for self-esteem and depression, the severity of eating-disorder symptoms predicted the amount of body-related social comparison (Hamel et al., 2012). Dieting amongst friends of adolescent girls predicts chronic dieting and other unhealthy and extreme weight-control habits five years later and predicts extreme weight-control behaviors amongst boys (Eisenberg and Neumark-Sztainer, 2010).

Early-adolescent female friends have been found to share body-image concerns and dietary behaviors: Peer influence is powerful to the point where you can predict one girl’s dieting and extreme weight-loss behaviors by looking at those of her friends (Hutchinson and Rapee, 2007). And comparing your appearance with others’, suppressing your feelings, and internalizing the “thin ideal” mediate the amount your peers are related to your self-esteem, eating problems, and body dissatisfaction (Shroff and Thompson, 2006).

Bullying is also sometimes a contributor to the onset of an eating disorder; interestingly, one study found that bullies are more likely to suffer from bulimic symptoms and victims of bullying from anorexic symptoms (Copeland et al., 2015).

Unsurprisingly, the belief that being thin will help you get more male friends was found to predict body-image concern, body dissatisfaction, and restrained eating amongst 14-16-year-old girls—and that belief, as well as the equivalent about female friends, was predicted by poor acceptance by friends (Gerner and Wilson, 2005). These relationships are all just correlations with no claims about causation, but they indicate the importance of friendship to any understanding of how eating and disordered eating play out.

By contrast, with social dynamics like family relationships, which have been subject to a huge amount of study, there doesn’t seem to be much research specifically on experiences of anorexia and friendship. However, a 2016 study (Westwood et al., 2016) involved semi-structured interviews with 10 people on an inpatient ward and provides some useful reference points for thinking about categories and subcategories of friendship experiences in the anorexic context.

Westwood and colleagues asked each participant an opening question: Can you tell me about your friendship experiences when you were younger before you became unwell with anorexia? They then asked open-ended questions covering topics including making friends, friendship activity, worries or difficulties about friendship, and the impact of anorexia on friendship.

An analysis of the interview transcripts revealed five broad themes of recurrent importance: social concern, the impact of AN, social connectedness, inflexibility, and preferred social activity. All 10 participants described anxiety about friendships prior to their eating disorder and most described having less contact with friends since becoming ill. You can read the full article online here, but I’ll flag some of the more specific findings now and then in my discussion.

I’ll use four posts for this topic: the first three will focus on friendship in illness, the last on friendship in recovery. Note that none will deal with the phenomenon of solely online friendship, because I think that falls into a quite different category, and because I know much less about it, never having had such a friendship. Some of what I’ll say may be relevant to those cases too, but communicating only in writing, or even only via video link, changes a lot.

Worries about various aspects of social interactions may often predate anorexia. As Westwood et al. explore, these may be causes or effects of a lack of closeness to or, conversely, an over-dependency on one’s friends, and/or a rigidity which is well documented in anorexic cognition more generally. They note that transitional phases that involve losing touch with existing friends and making new ones (e.g., moving from school to university) can also be harder with anorexia (as with any other condition that interferes with social engagement).

My own experience, for some years before anorexia, was a frequent feeling of being an outsider, which by secondary school had generated two fairly separate personae: the quiet, hard-working pupil who spent all her lunch hours in the library, and the precociously cool, underage clubber with a tiny circle of school and other friends to go out with on Fridays and Saturdays. (Growing up in the ’90s in the heartland of trip-hop and the heyday of trance and house helped keep the latter thriving.)

I think here it’s really important not to conflate having not many friends with having poor friendships or being miserable. It’s common to find strong implications in the research that being solitary and having fewer friends (two characteristics of people who go on to develop anorexia) are obviously problematic (e.g., Krug et al., 2012); smaller social networks are inevitably part of poor social functioning. But plenty of research shows, for example, that although the quantity of friendships is related to happiness, the quality of friendships is more strongly related (Demir et al., 2013).

I say this not just because I was, and have become again, someone who has only a few but meaningful friendships, but also because this borders the question of normality that’s never far away when thinking about recovery from anorexia (and which I explore in-depth here).

Recovery needn’t be about achieving any kind of quantitative norm. In the realm of eating, normality can sometimes be a useful guide, especially early on. But in many areas, it grows ever clearer that a numerical norm is not an ideal to be aspired to, and this is obviously true about friendship in the era of commodified, online pseudo-friends.

So, the fact that having few friends is a predictor of eating disorder onset may not mean any more than that both correlate with something else—like thinking that people will like you more if you’re thinner, say, or caring too much about your schoolwork.

Indeed, for all the associations I’ve described in this section, facts about friendship are probably best thought of as manifestations of other tendencies that can themselves easily become problematic, particularly cognitive inflexibility. Inflexibility is certainly what underlies many of the ways in which the acute phase of anorexia can affect a friendship.

The next two parts of the post will focus on how anorexia can affect friendship, and vice versa, from friendship back onto illness. Then in the final part I’ll also look at how friendships can galvanise recovery and be changed by it themselves.

Thanks to Karen for suggesting I write this post and sending me the Westwood et al. study as inspiration.